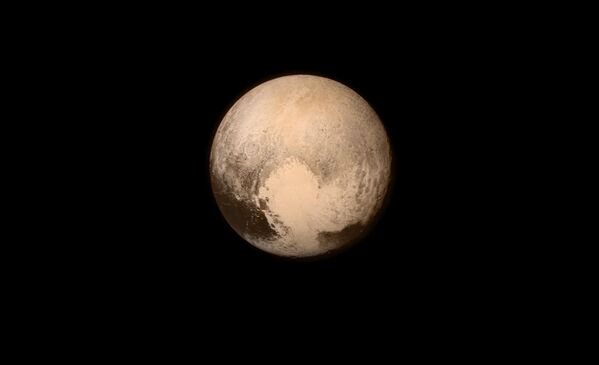 1/7
© AP Photo / NASA
This July 13, 2015 image provided by NASA shows Pluto from the New Horizons spacecraft. The United States is now the only nation to visit every single planet in the solar system. 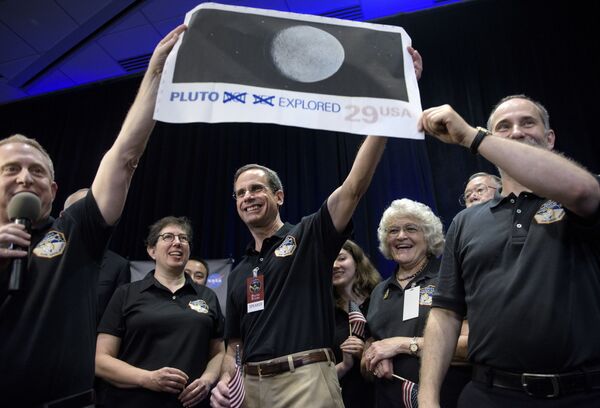 2/7
© AFP 2022 / Brendan Smialowski
Dr. Allan Stern (L), principal investigator for the New Horizons mission to Pluto, and others hold up their suggestion for a modified US Post Office stamp of Pluto at the Johns Hopkins University Applied Physics Laboratory to celebrate the closest fly-by of the New Horizons probe July 14, 2015 in Laurel, Maryland. The unmanned NASA spacecraft whizzed by Pluto on JUly 14, making its closest approach in the climax of a decade-long journey to explore the dwarf planet for the first time, the US space agency said. Moving faster than any spacecraft ever built -- at a speed of about 30,800 miles per hour (49,570 kph) -- the flyby happened at 7:49 am (1149 GMT), with the probe running on auto-pilot. It was to pass by Pluto at a distance of 7,767 miles (12,500 kilometers). Looking on 2nd-Right is Annette Tombaugh, daughter of the man who discovered Pluto, Clyde Tombaugh. 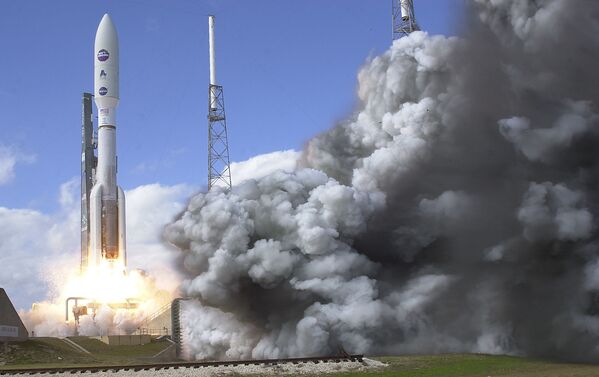 3/7
© AFP 2022 / Bruce Weaver
The New Horizons spacecraft atop an Atlas V rocket lifts off 19 January 2006 at the Kennedy Space Center, Florida. The spacecraft is on a trailblazing probe to Pluto, at the solar system's outermost limits, following two days of delays. 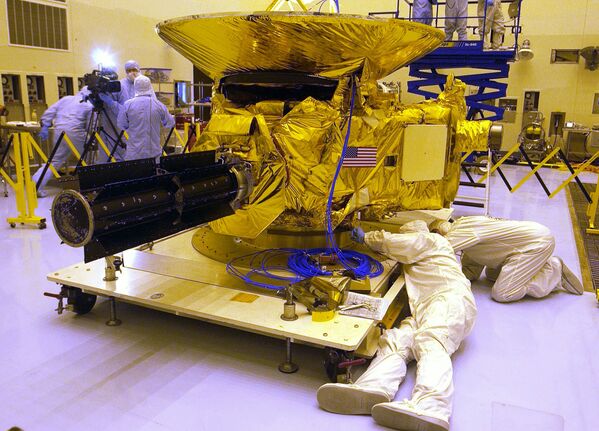 4/7
© AFP 2022 / Bruce Weaver
Engineers from Johns Hopkins University check out NASA's New Horizons spacecraft 04 November 2005 in the Payload Hazardous Servicing Facility at Kennedy Space Center, Florida in preparation for its mid-January 2006 launch aboard an Atlas V rocket. The New Horizons will be the first mission to the planet Pluto and the Kuiper Belt, the journey taking about nine years. Pluto was discovered in 1930 at a distance of some 6.4 billion kilometers (three billion miles) from the sun in the heart of the Kuiper Belt -- a zone beyond Neptune 4.5-7.5 billion kilometers (2.8-4.6 billion miles) from the sun, which is estimated to include more than 35,000 objects of more than 100 kilomters (65 miles) in diameter: the remnants of the sun's accretion ring of matter from which all the planets were formed. 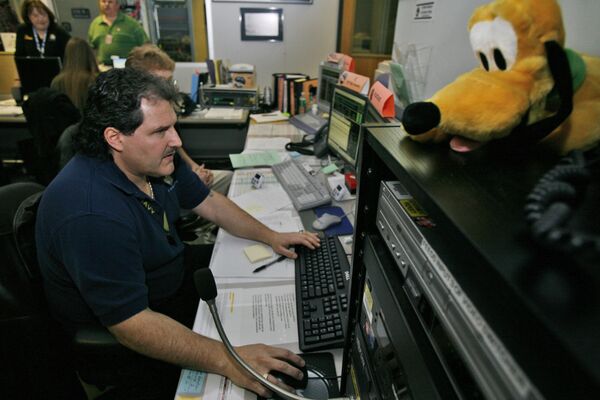 5/7
© AP Photo / Jacquelyn Martin
Tim Miralles, a flight controller who also helped to build and test the New Horizons spacecraft, watches as data comes in from the spacecraft after it passed Jupiter while in the Johns Hopkins University Applied Physics Laboratory in Laurel, Md. on Wednesday Feb. 28, 2007. NASA's New Horizon's space probe was pointed toward Pluto and the frozen, sunless reaches of the solar system on a nine-year journey after getting a gravity boost Wednesday from Jupiter. 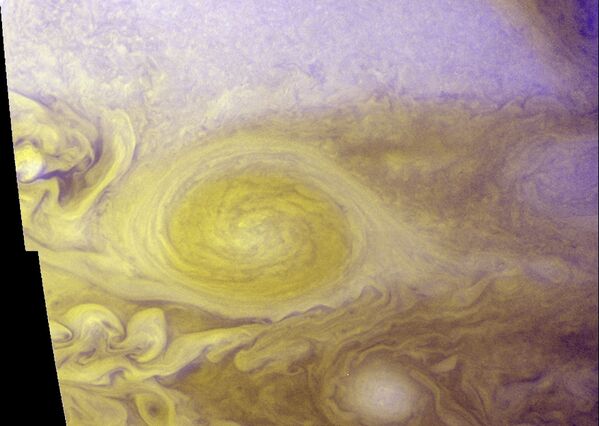 6/7
© Foto / Public Domain
This amazing color portrait of Jupiter's "Little Red Spot" (LRS) combines high-resolution images from the New Horizons Long Range Reconnaissance Imager (LORRI), taken at 03:12 UT on February 27, 2007, with color images taken nearly simultaneously by the Wide Field Planetary Camera 2 (WFPC2) on the Hubble Space Telescope. The LORRI images provide details as fine as 9 miles across (15 kilometers), which is approximately 10 times better than Hubble can provide on its own. The improved resolution is possible because New Horizons was only 1.9 million miles (3 million kilometers) away from Jupiter when LORRI snapped its pictures, while Hubble was more than 500 million miles (800 million kilometers) away from the Gas Giant planet.
The Little Red Spot is the second largest storm on Jupiter, roughly 70% the size of the Earth, and it started turning red in late-2005. The clouds in the Little Red Spot rotate counterclockwise, or in the anticyclonic direction, because it is a high-pressure region. In that sense, the Little Red Spot is the opposite of a hurricane on Earth, which is a low-pressure region - and, of course, the Little Red Spot is far larger than any hurricane on Earth. Scientists don't know exactly how or why the Little Red Spot turned red, though they speculate that the change could stem from a surge of exotic compounds from deep within Jupiter, caused by an intensification of the storm system. In particular, sulfur-bearing cloud droplets might have been propelled about 50 kilometers into the upper level of ammonia clouds, where brighter sunlight bathing the cloud tops released the red-hued sulfur embedded in the droplets, causing the storm to turn red. A similar mechanism has been proposed for the Little Red Spot's "older brother," the Great Red Spot, a massive energetic storm system that has persisted for over a century.
New Horizons is providing an opportunity to examine an "infant" red storm system in detail, which may help scientists understand better how these giant weather patterns form and evolve.
Deutsch: Little Red Spot (zweitgrößter Wirbelsturm) auf dem Planeten Jupiter. Siehe auch hier. 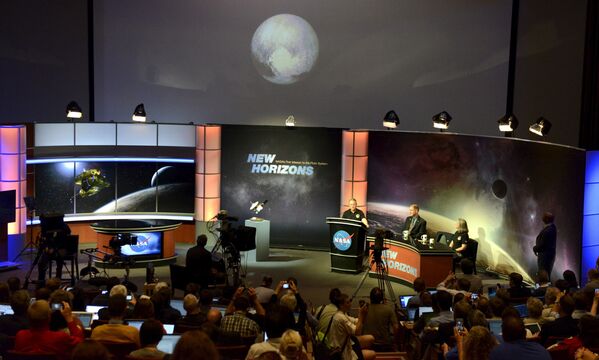 7/7
© REUTERS / Mike Theiler
Members of the media view an image of Pluto on the screen taken a day earlier by the spacecraft New Horizons as it approached a flyby of Pluto, at NASA's Johns Hopkins Applied Physics Laboratory in Laurel, Maryland, July 14, 2015. More than nine years after its launch, a U.S. spacecraft sailed past Pluto on Tuesday, capping a 3 billion mile (4.88 billion km) journey to the solar system’s farthest reaches, NASA said. The craft flew by the distant "dwarf" planet at 7:49 a.m. after reaching a region beyond Neptune called the Kuiper Belt that was discovered in 1992. The achievement is the culmination of a 50-year effort to explore the solar system.
Feed de notícias
0